Over the years, a great many songs have been written about stairs. Song titles involve walking, passing, climbing, and running on stairs. There's also "Room at the Top of the Stairs"  by Eddie Rabbit, "Halfway Down the Stairs" by the Muppets, and even "I'm Gonna Walk Dem Golden Stairs"  by Elvia Presley.

However, the most famous staircase of all time has to be "Stairway to Heaven". The Led Zeppelin hit was written by Robert Plant. In responding to questions on the meaning behind the song, Plant reportedly said, "Depending on what day it is, I still interpret the song a different way --- and I wrote the lyrics."

Whether you're on the stairs, gazing up at them, or quietly strolling down them, there's no doubt about it. Stairways have played a significant role in homes (and songs!) across this country for decades.

The song “Stairs” by Yellow Magic Orchestra may sum it up best:

Whether you’re looking to climb them, gracefully stroll down them, or even stomp on them, we hope you’ll remember us at L.J. Smith when it’s time for your new stairway system. We’ve got hundreds of styles, expert craftspeople, and stunning accents that can make your staircase the main feature of your home. Your own little stairway to heaven. 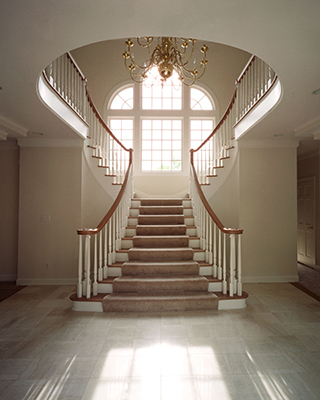