For homeowners and experienced DIYers Jamie and Jamison Rantz, a mixture of Hickory and iron proved the winning combination for their basement stairway. Following the popular trend of mixing woods and metals in the home, the Rantz family got exactly what they wanted --- a transitional look that’s not too modern and not too traditional. 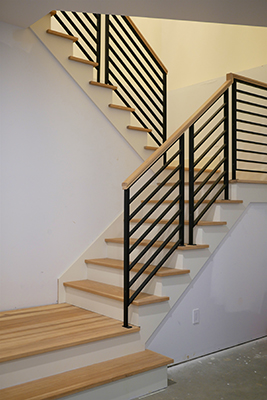 “We feel the natural wood treads and handrail, combined with the horizontal metal railings, is the perfect fit for this stairway,” says Rantz, who wrote about the basement stairway project in his blog, Rogue Engineer. “We love mixing materials and colors whenever possible. In this case, we also took a different route by using horizontal rail panels instead of vertical balusters. This added to the more modern feel of the stairway.”

Putting the Pieces Together

For the project, Rantz worked with the design team at L.J. Smith. “The designers asked for the measurements and then calculated the entire stair system layout based on the information we provided,” says Rantz. “They were amazing to work with and the project turned out very nicely.”

Rantz brought in a trim carpenter to help with the project. The experienced carpenter handled cutting and installing the mitered skirt board and risers. Once that portion of the project was complete, Rantz assisted with the installation of the treads and pre-assembled panels from the Linear Metal Panel System. Using the diagram supplied by L.J. Smith, the flat metal panel on the landing was installed first, followed by the angled panels. Then the Hickory railing was added to match the treads. 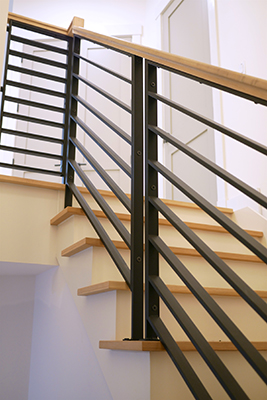 “We selected Hickory for the railing and treads since it’s such a hard, durable wood,” says Rantz. “We knew this would be a high traffic stairway in our home. Matching the Hickory up with the welded look of the metal low-sheen black vertical panels was a winning idea. The quality of the railing and treads were great.

“Overall the process took us a couple of days. This is definitely a manageable project for a DIYer with some experience and good common sense.”

The completed stairway meets the homeowner’s desires for creating a sleek transition to their finished basement while following through with metal accents from other areas of their home. In their kitchen, they have a black metal library ladder to access tall wood cabinets. Their fireplace also has black steel accents. 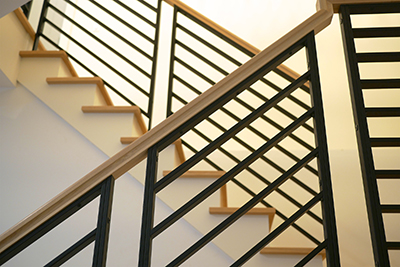 “We love the look and durability of the L.J. Smith stairway,” says Rantz. “Everyone who comes into our house comments on the uniqueness of the stairway. Our family has put this stairway through the test over the past few years, and it still looks as good as the day we installed it!”