When the curtain rose again at the historic Goss Opera House in 2020, the structure had been transformed. Thanks to a five-million-dollar renovation, every inch of the 37,000-square-foot building space was refurbished including eye-catching interior stair systems. 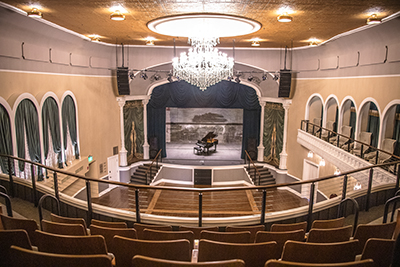 Situated in downtown Watertown, S.D., the Goss Opera House was brought back to life after a nearly 70-year hiatus. The non-profit group, Friends of the Goss Opera House, purchased the building on December 31, 2018. They then turned their attention to transforming the structure back to its original 1889 grandeur.

“Everything from the roof down to the flooring was updated,” says Jamie Mack, executive director with Friends of the Goss Opera House, Inc. “We had tremendous local support. The hard work of many people transformed the Goss back into a vibrant entertainment center.”

A highlight of the opera hall itself is the new Linear Collection stainless steel cable and tube rail system surrounding the stage and balcony areas. Interior designer Lori Storley chose products from L.J. Smith® Stair Systems to add a modern touch to the restoration. 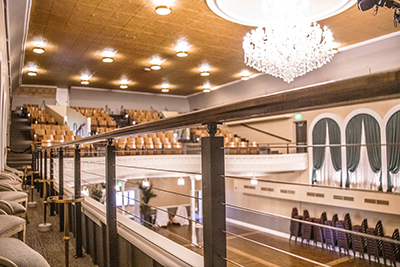 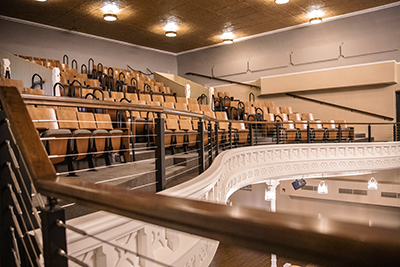 “We focused on creating a historically-sensitive renovation,” says Storley, principal designer with HomeTown Building Center. “This wasn’t a formal restoration. Instead, we selected products that are respectful of the past and invoke historic elements, while still being modern. The cable rail perfectly meets that task. It’s the ideal product to allow great vision to the stage. It also adds the element of safety we need and has the modern edge we desired.” 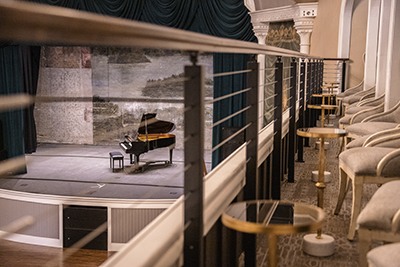 According to Mack, the cable railings were the last element to be added to the opera hall. “I believe the designers picked the perfect system from L.J. Smith to finish off the balcony and stairs on the side of the stage,” says Mack. “The cable system is just the right combination of elegance and functionality.”

“The classic style of the L.J. Smith wood box newel and handrail complements the warm wood tones throughout the building,” says Storley. “At the same time, the iron balusters add a nice, modern element to the design. This creates a terrific balance. The stair system looks substantial but not too heavy within the space.” 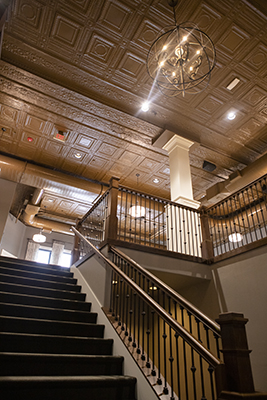 According to Storley, the decorative newel and graceful volute of the main lobby Grand Staircase invite guests upstairs to explore the building. A second and third-floor stair system adds detail and interest to the space, including box newels and metal balusters with knuckles. 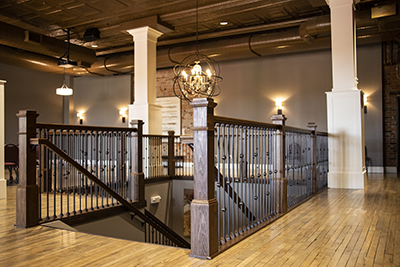 “I’ve used L.J. Smith products many times over the years in other projects,” says Storley. “The quality of the products and the wide variety of styles make it a great resource for designing stair systems.”

Helping make the magical transformation take place during the early stages of the Goss Opera House renovation was the team at Building Products Inc. (BPI).

“We owe so much to BPI and their generosity,” says Mack. “Tim Qualm from BPI did all the measuring, showed us samples of L.J. Smith products, and then did the ordering. The cable system in the opera house was paid for out of our budget. Other than that, all the stair system parts were donated by the owners of BPI, who have their corporate office here in Watertown. 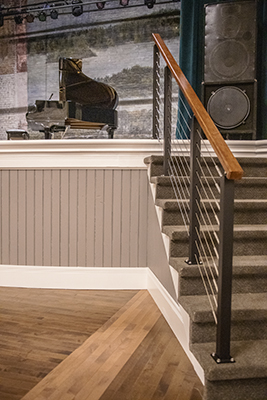 “This was such an outstanding community project. Gray Construction, who installed the stairway systems and did so much work on this restoration, donated a portion of their fees to help us get this massive job completed in less than two years. The quality of their work, under a very tight deadline, is commendable!”

Now open to the public for musicals, concerts, and plays, the Goss Opera House has helped reinvigorate Watertown’s business area. 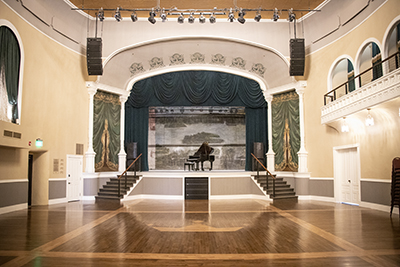 “We’re seeing more and more interest in bookings and rentals of our facility following the renovation,” says Mack. “There’s stronger traffic through the downtown area. As a result, our attendance numbers continue to rise.

“We constantly hear from members of our community about how impressed they are with the renovation. I’m receiving very specific comments about the stair systems. People believe the cable system in the opera house is very classy, and they appreciate how it doesn’t distract from the entertainment on stage. In the lobby, the grand staircase is now ‘the place’ to be seen and photographed. That stairway is the finishing touch on a stunning renovation.”