Add together end-to-end all the finger-jointed material made in just one year by Bill Blanchard, Dave Sell, and Chuck Woods, and you could go from Portland, Maine to Vancouver, Canada.

Located at our L.J. Smith company headquarters in Bowerston, Ohio, each of the men fabricates finger jointed rail stock. Together, they’ve been making this important stairway component for decades.

Married to the Job

“I’ve been with L.J. Smith as a finger jointer operator since 1987,” says Blanchard, the senior craftsman. “It’s hard to forget the anniversary since it’s the same year I got married! I guess you could say I’ve been married to both my wife and this company for 34 years.”

During his time on the finger joint line, Blanchard has found a rewarding career. “This is a very physical job,” says Blanchard. “I’m constantly moving, bending, and putting wood through the machines. 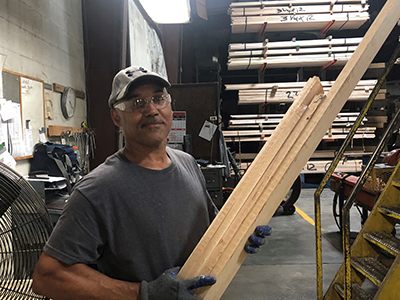 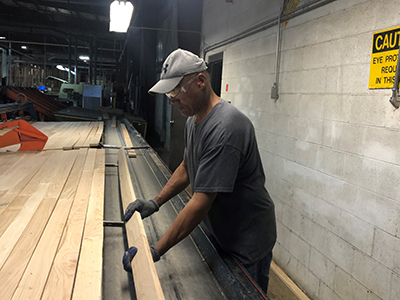 “It’s meticulous, but also rewarding. I’ve been on the same machine for almost as long as I’ve been here. I don’t let the machine beat me or stress me out. I pay attention and take each day carefully.”

Although they work different shifts, Sell echoes Blanchard’s sentiments about workplace safety. “The three of us are experienced and always conscious of the safety elements needed in our jobs,” says Sell, a finger jointer operator for 25 years. “It’s amazing to think of how many lineal feet I’ve crafted during my time with the company.”

Both Sell and Blanchard agree that their favorite wood to work with is Oak. The strong wood handles the moisture well and doesn’t bow. Sell also believes it looks the best as a handrail on a stair system.

“Poplar is a softer wood and easier to work with,” says Sell. “When we’re working with Beech or Hard Maple the wood ‘fights us’ and is a bit more difficult to work through the machine. That’s when I really concentrate to get it right.” 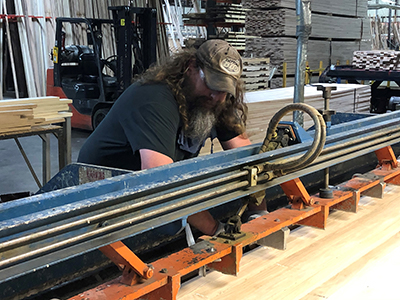 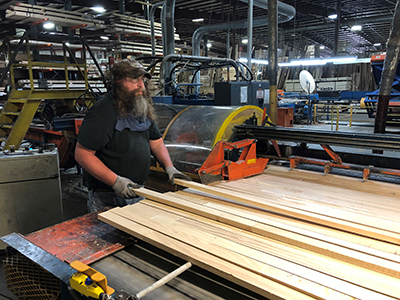 It’s not lost on Chuck Woods that his name is his business. The Ohio native has been a finger jointer operator with L. J. Smith since 1995. Together with Blanchard and Sell, Woods knows the procedure by heart.

“We take blank boards of different thicknesses and widths and run them through the cylinder head,” says Woods. “The machine cuts opposite joints. Then we push those together with filler. Two pieces go on the bottom and one on the top as a cap. That’s how handrail has been made for generations.”

According to Blanchard, who is married to both the job and his wife for more than three decades, his position with L.J. Smith has been a positive experience.

“This job helped me get two kids through college,” says Blanchard. “And, it’s especially rewarding in that we’re producing essential parts of the company’s stair systems every single day.

“The numbers don’t lie. I know my efforts are part of millions of L.J. Smith stairways all around the world. That’s quite a legacy.”